The planet is our home; we need to be more responsible. Here's what I do.

At this time of year, bee keepers start to become careful about swarming.

Spring and summer are the most likely times for bees to take off.

The process is very simple. In spring if the colony feels that their home is getting too crowded they can begin to prepare for a move.
This can be indicated by the existence of queen cells in the hive.  The colony will prepare u creating one or more new queens. The old queen will take flight with a number of bees leaving the hive in the hands of a new queen or queens. These then fight to the death to take over the colony.

It’s a good way of sustaining the health of the hive too.

Instead of the traditional hexagonal comb, a queen cell is larger and more rounded. They are often positioned in a contrary direction. For example they may be along the edge of the comb facing outwards or downwards.

When the keeper checks the hive she will remove or squash these cells. 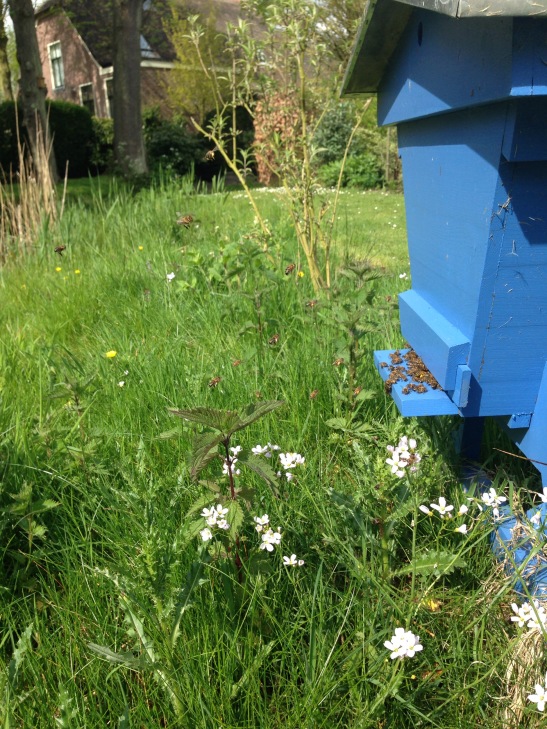 In our African hive we were pleased to find a thriving colony. We didn’t find queen cells. Phew.

Then we expanded the hive by giving them additional bars. In some situations a keeper can split a colony, creating an artificial swarm. In doing this the queen is removed with some bees and relocated. The bees left behind can then create a queen by feeding the eggs in the hive with Royal jelly so they will still have a queen.

Take it with you:

This entry was posted on May 22, 2015 by lizard100 in beekeeping and tagged checks, swarm prevention.

Categories in my blog a blog by a multilingual lifelong expat/international, linguist, researcher, speaker, mother of three, living in the Netherlands and writing about raising children with multiple languages, multiculturalism, parenting abroad, international life...

The planet is our home; we need to be more responsible. Here's what I do.